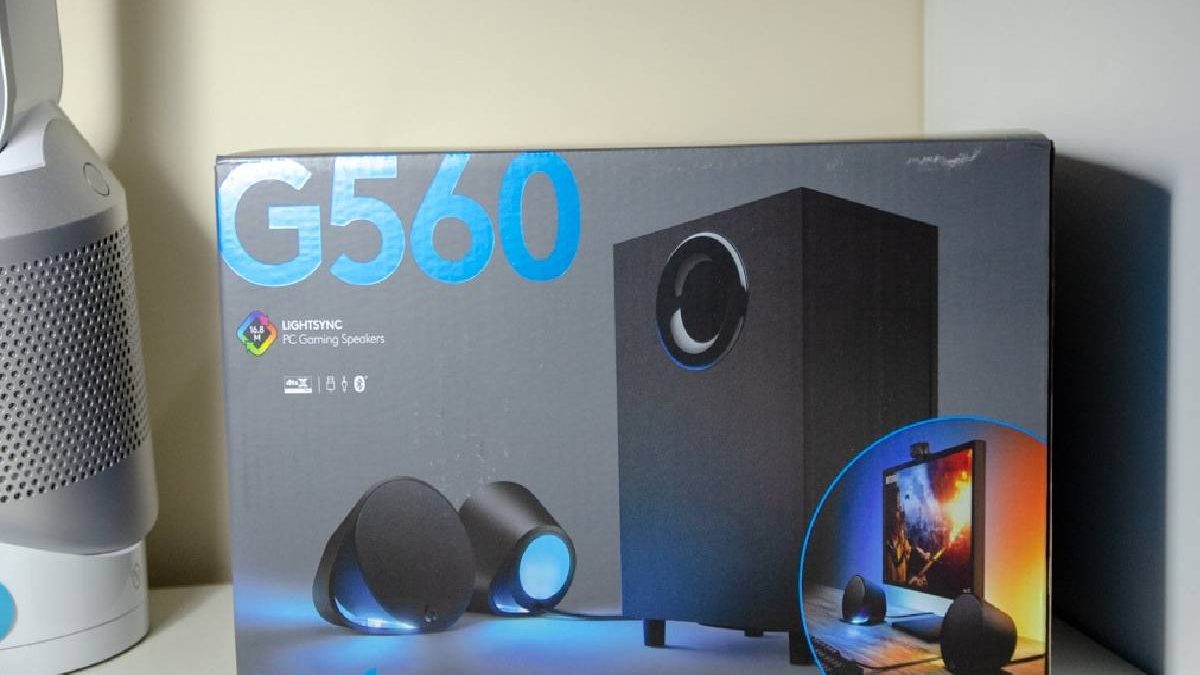 Logitech offers everything to give gamers the best possible immersion experience with its range of gaming accessories from keyboards to headsets. The so-called light sync uses more and more. That means that the keyboard and mouse with RGB lighting are colour-coordinated with what is happening on the monitor. We recently took a quicker look at the latest gaming keyboard from Logitech. Here you can read again precisely what to expect with the Logitech G513 Carbon.

With the Logitech G560 loudspeakers, the boxes on your desk should now light up in a wide variety of colours and deliver great sound at the same time. Logitech wants to immerse you even deeper in the game. We took a closer look and, above all, listened to whether the promise save.

If you open the packaging for the first time, you will notice a greeting from Logitech on the one hand and an instruction manual printed on the box on the other. You will not find a separately printed manual. This is, of course, not a big deal, as the functions are pretty self-explanatory and do not represent a significant hurdle to use. A reference to the Logitech G software would have been excellent, however. To be able to regulate the settings of his stylish loudspeakers optimally, the software is essential. It is downloaded from the official Logitech website and offers you specific locations. But more on that later.

All sorts of connection options

The relatively small noisemakers come in a rounded look that is somewhat unusual for PC speakers. On the inner side, there are small cavities in which the front LED lighting to locate. The backs consist entirely of a lighting sphere, which ensures that the wall behind the boxes lights up in a wide variety of colours. Both the subwoofer and the loudspeaker complete black plastic, which looks good overall and makes a chic impression.

You have different options to use the speakers. You connect your computer to the system in a traditional way using a micro-USB cable to fully enjoy all the sound functions and the coordinated RGB lighting. A Bluetooth function is also available, with which, for example, music also conveniently plays on the smartphone.

The controls are all on the right speaker. In addition to the volume control and the on / off button, there is also a freely programmable button and a 3.5 mm jack connection. On the other hand, the subwoofer does not have its controls for making settings directly on the device.

Now we come to what is most interesting about a loudspeaker system: the sound. Overall, a balanced sound unfolds, a real feast for the ears in the stereo 2.1 setting. Optionally, DTS: X Ultra 7.1 surround sound switch on via the software. A believable ambient noise generates during games and films. You can also quickly locate the positions of opponents using noise. However, the mids and highs sound very dull, especially in movies. In the stereo version, however, the sound quality does not allow any negative criticism.

Using the in-house Logitech software, you can make some settings on the equalizer, with which you can set the sound either with prefabricated profiles or simply yourself according to your wishes. In this way, the sound image edits extensively, even without your controls on the subwoofer or speakers.

With an output of 120 watts (RMS), there is a lot of oomph from the manageable plastic cladding. The mids start to rattle noticeably unpleasantly at high volume levels, which is not particularly significant when gaming since at least their speakers will tear open as far as they will go when playing. On the other hand, the already relatively high volume at low settings is a bit annoying. Even if the entire book of the computer has already been set relatively common, we are not infrequently startled when a game start with the volume turned to maximum.

Last but not smallest, we come up with the feature that makes the G560 confirmed gaming speakers. With the help of the Logitech software, the lighting of the speakers adjusts to the sound of the music or running games. There are ready-made profiles for current blockbusters, such as Battlefield 1, Grand Theft Auto 5, or Fortnite Battle Royale. In GTA, for example, the speakers light up alternately in red and blue when the police or your wall is following you is wrapped in deep red when a flame thrower uses in Battlefield.

Should you ever want to gamble late at night out of consideration for your neighbors but don’t want to do without the lighting, that’s no problem at all. You can easily connect your headphones via the jack connection on the right speaker. The sound now comes through the headphones, but the speakers still deliver the associated play of colours.

The lighting offers an even more immersive gaming experience without being too intrusive. For games without a prefabricated profile, you have the option of configuring all four lighting zones yourself. Logitech will also offer other prefabricated products in the future. If you play music on the system, it illuminates to match the beat and provides a colourful spectacle for visual accompaniment enthusiasts. If you own other gaming accessories with RGB lighting from Logitech, you can synchronize the lighting of the keyboard and speakers with each other.

The Impact of Technology on The Real Estate Industry