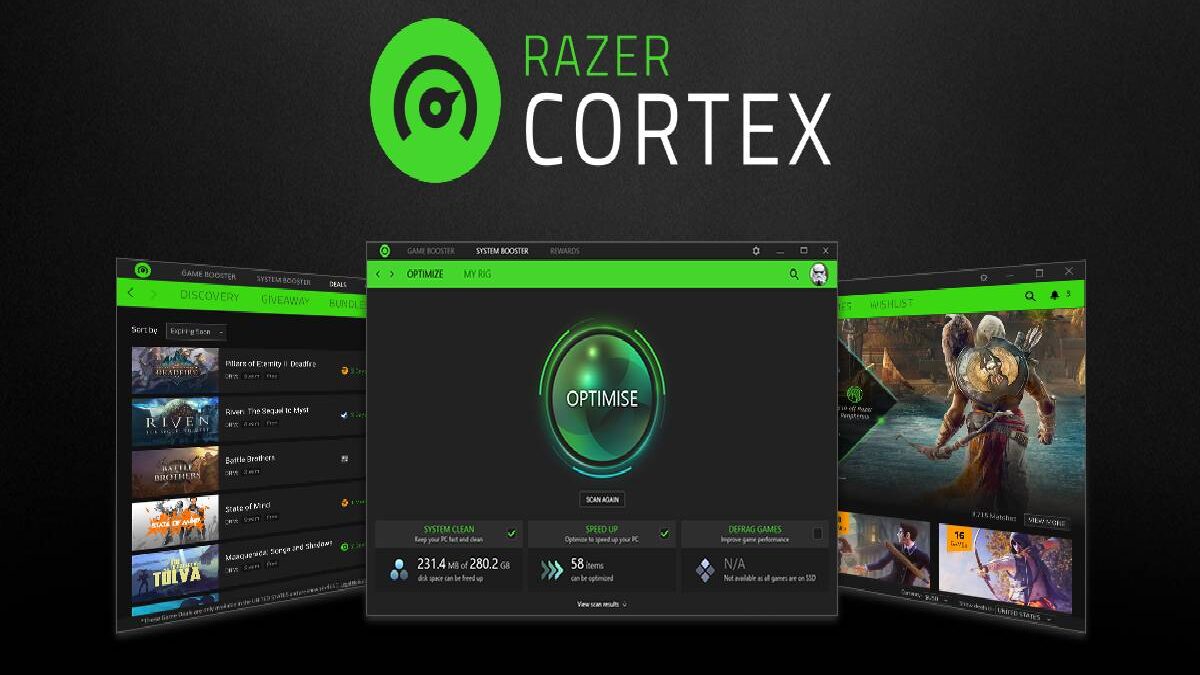 What is Razer Cortex, and how it helps your gaming PC?

The Razer Cortex software is a game accelerator for PC or laptop, with Windows operating system, which ensures that your computer does not slow down when you use it as a gamer.

The main reasons why video games slow down the game process are:

The internal system must load a large amount of data. While playing, background processes are running.

Lack of load optimization for some games. That is the case of Fortnite, for example, one of the best-known video games.

The minimum requirements that a computer must-have for the loading of a video game-like Fortnite to be optimal are:

Razer Cortex has become one of the best optimizers for gaming. Next, we will explain what its main advantages are.

The main benefits of using PC performance optimizer software like Razer Cortex are:

Its interface is very intuitive and allows you to access all the games quickly.

It is free software.

It brings a smooth gaming experience by turning off all unnecessary applications during the game.

That means the full potential of the computer’s system, GPU, CPU, and RAM dedicated to gaming. Reduces loading time.

It performs a computer diagnosis by analyzing the hardware, internal memory, or CPU status.

Modify some Windows settings to make the PC run faster in general. You can defragment the folders where the games install.

It allows you to buy digital games through platforms such as Steam, Amazon, and GOG.

It offers the possibility of saving the games in the cloud by synchronizing the Dropbox account with the software.

And also, it is a beta feature that allows saved games to access from anywhere.  Allows you to capture screenshots and record videos.

How can you use the Razer Cortex to make your PC optimal for gaming?

The Razer Cortex software has a relatively simple internal operation:

it closes the processes and services that it considers not necessary for the game function and thus increases the loading speed of the video game.

That would work in the “recommended” mode, but it also allows the user to customize which computer resources the program should close.

The background applications, which affect the load on Windows PCs, take action even when they are not active in the application window.

Some of them are Office, Adobe, or Paint.

This customization also allows you to improve the use of RAM to increase the temporary memory available on the computer.

Another recommended option is “high performance,” which optimizes the frames per second or FPS displayed,  increasing the loading speed.

What are the improvements that Razer Cortex makes on my computer?

Razer Cortex, increasing the loading speed of the video game and optimizing the computer, offers the following improvements:

Regarding how Razer Cortex optimizes the FPS (frames per second) of video games:

This software is capable of cushioning some FPS drops. Improves load speed on older computers. The images per second that are loaded are increased by 5-10%.

In addition to optimizing the loading speed of video game frames, Razer Cortex helps in:

The consumption of CPU and GPU. The use of RAM. That is promising because this software closes some processes that allow the computer’s memory not to be consumed or performance to drop.

Why use a game optimizer?

As explained above, game optimizers or ” game boosters ” are programs that help increase the performance of games on a PC.

Its technology-based on limiting background operations when the user is playing on a computer.

The main objective of a game booster is for a game to run at the maximum frame rate and stably. This software achieve:

Disable unnecessary processes, services, programs, and background tasks while the game is running.

Benefits of using a game optimizer

The main benefit that a gamer seeks when having a game booster is that the PC works at its maximum power to play with the full benefits. Other services for which players use this type of software are:

The game optimizer will change your computer settings so that the games will run smoothly.

When they finish playing, everything will be activated again. Increases the performance of the computer system.

Besides Razer Cortex, there are other game optimizers:

MSI Afterburner. It offers overclocking options, which increases the clock frequency of the CPU or GPU above the manufacturer’s specifications.

In addition, it allows you to customize the fan speed, video recording, and monitoring.

In addition, you can read more helpful posts at marketingmediaweb